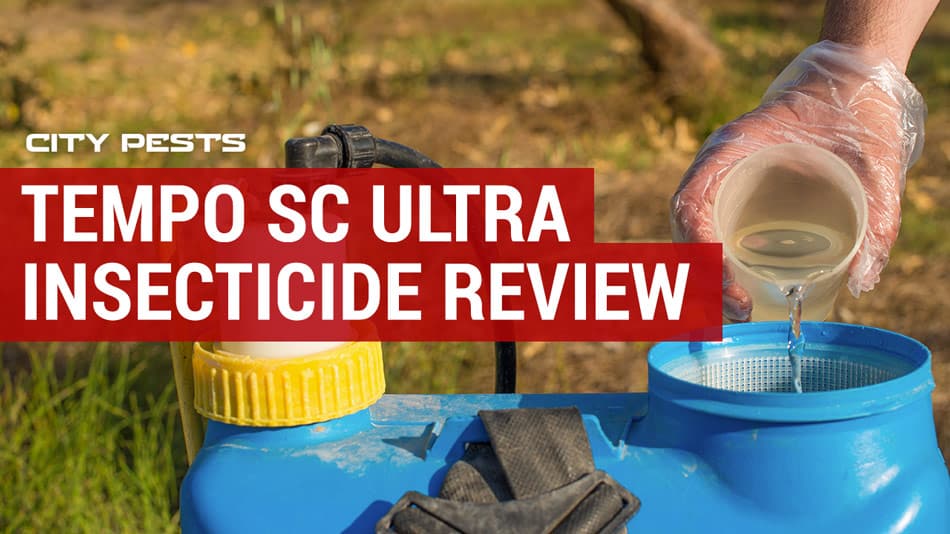 Manufactured by Bayer AG, a German company that is known for manufacturing some of the top pest control products on the market today, Tempo SC Ultra is one of their top successes. The main differentiator that has made it stand out among competing products is how safe it is to use as well as its long-lasting results when it comes to fighting off unwanted pests in a variety of settings.

Tempo SC is classified as a broad-spectrum pesticide which is a type of pesticide that targets an entire group of pests which have been known to cause damage to gardens and plants. Often, it’s used when various types of organisms or pests are having detrimental effects on plants. These types of pesticides are also used when the specific organism or species is unable to be pinpointed exactly. Here in our Tempo SC Ultra review, you’ll be able to see both the good and bad of this Bayer product. 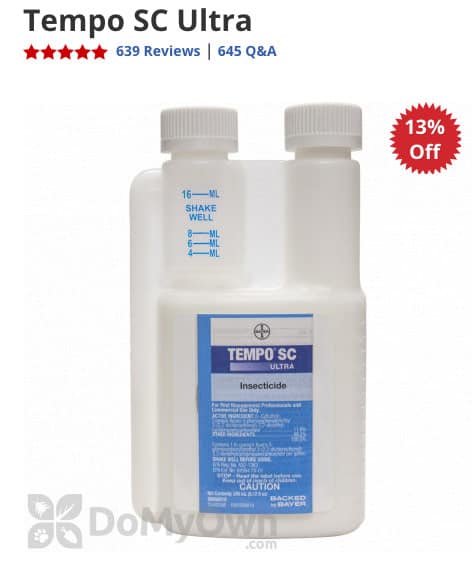 Just want to see the product? Click here to see at DoMyOwn.com or continue reading to find out more about this insecticide in our review.
See Tempo at DoMyOwn.com

The main ingredient used in Tempo Ultra SC insecticide is beta-cyfluthrin, which falls under the pyrethroids family. The bugs encounter it and it ends up being absorbed by their body which results in stomach poisoning. It also attacks the nervous system which produces the onset of muscle spasms through the insect’s body.

Over time, the muscle spasms and attack on the nervous system will cause bugs to become paralyzed which ultimately leads to starvation. Bugs can’t break it down as quickly as people or animals, which is why it has proven to be one of the most effective pest control methods. This is also why it can be used in a variety of settings including agriculture, food service, and residential (just make sure you exercise caution in sensitive areas and allow it to dry fully).

The liquid suspension-concentrate formulation allows for even dispersal when applying Tempo SC Ultra insecticide to desired areas. The active ingredient doesn’t become unsuspended, meaning that you don’t have to shake (or in other words re-agitate) the pesticide mixture for it to continue working properly. A quick knockdown can also be expected throughout the application.

What kind of bugs does Tempo kill?

There are over 100 different types of bugs proven to be unable to stand a chance against Tempo SC Ultra. Some of the most common bugs include ants, bedbugs, centipedes, flies, gnats, millipedes, moths, mosquitoes, roaches, silverfish, spiders, wasps, and yellowjackets. There are many more that it has proven to be effective against which can be found on the instruction label.

What is Tempo SC Ultra used for?

Tempo SC Ultra is used for general pest control applications where a solution is needed to help eliminate insects on contact (keep in mind that it’s not an instant kill, so it does take time to work). This means that it’s used on general surfaces, in tight spots, or cracks and crevice located both inside and outside of structures as well as the perimeter that surrounds them.

Below, you’ll see the locations of its most common usage applications.

Can Tempo SC Ultra be used on gardens?

Tempo SC Ultra may be able to be used in areas where there are usually groups of people or animals, but this doesn’t mean that it’s safe to be used on edible plants. The label specifically states that it shouldn’t be used directly on any plant that is edible. After further research, there wasn’t any type of Tempo pesticide found to be safe to be used for this purpose.

It’s safe to say that you should seek an alternative pesticide if you need one to use on edible plants. Since Tempo SC Ultra is only for usage on and in structures as well as their perimeters, it should only be used for such. There are many other products which we’ve reviewed here on City Pests that can be safely used on gardens. It’s never worth the risk to taint your garden with a product that could up making you and others sick.

Many times, this is confusing and thought to mean that Tempo shouldn’t be used on bushes and other non-edible plants. The truth is that it can be used on flowers, shrubs, and trees that aren’t edible but rather used for ornamental landscaping. So, if you need a pesticide to spray your landscape with, this is still an effective option to use to yield powerful results.

Believe it or not, this is where Bayer has gained a competitive advantage. It’s commonly used around livestock, animal housing, veterinarian hospitals, and many more areas where animals are regularly housed or kept. It’s after extensive research that we’re able to say that Tempo SC Ultra is very safe to be used around where your pets may be.

During application, you will want to keep animals and children out of the area, but this is to allow time to dry and make sure that there’s no risk taken. Since it’s odorless, it won’t emit nearly as many fumes as pest control products that aren’t odorless.

It only takes about an hour or so to let Tempo SC Ultra insecticide dry after its application. Once it’s dry, you can feel comfortable letting your children and pets back into the area where it was applied. Other than that, there are no special precautions that need to be taken.

How to Use Tempo SC Ultra for Bed Bugs

When it comes to bed bugs, it’s not anything like a cockroach problem. It requires a highly unique approach and many things must be done to truly win your bed bug battle. Don’t worry, we’ve got you covered just like we did with the many other pest infestation problems outlined here on CityPests.com.

First things first, you need to know where bed bugs like to hide so that you can be sure to put your eyes directly on the current state of the infestation. Common areas for bed bugs can include cracks and crevices where one rests or sleeps regularly (such as behind or under baseboards, under area rugs, places where the carpet meets the walls, areas of appliances where power sources are stored, and in the folds of curtains or drapes).

Once you can put your eyes on the problem areas, you can continue with bed bug treatment in the most effective manner possible. While Tempo SC Ultra is a great spray to use, it should be used in combination with a reputable bed bug dust to ensure that there’s as much pesticide coverage as needed to ensure truly beneficial results sure to last over the long-term. You’ll want to use Temp on carpeted areas, furniture, tight spots such as cracks and crevices, as well as on/behind baseboards.

The bed bug dust is what you’ll end up using on mattresses (be sure to put a plastic mattress cover on the mattress after applying the dust) and other areas where Temp0 SC Ultra may not have been able to be used safely. A place that needs to be mention where Tempo can’t be used is on mattresses themselves.

Under all circumstances, make sure that you spray your carpet and any other fabrics such as curtains with a bed bug spray. By doing this you’ll ensure that there is no place safe for those critters which eliminate the chance of them reaching another stage of colonization poised to take over your home.

How to Mix Tempo SC Ultra

The proper mixture is 1 tablespoon (16 milliliters) per 1 gallon of water. This covers roughly 1,000 SF of surface area total. This not only allows for proper coverage, but it also helps minimize any runoff that could occur from using too much Tempo at one time. While many may think that large infestations require a greater amount of Tempo than usual, this isn’t the case. Where large infestations are present, the help of an experienced and licensed pest control technician is strongly advised.

You’ll want to use a handheld, pressurized sprayer to apply Tempo SC Ultra and the mixing should be done within the sprayer’s tank itself. One of the most common handheld sprayers used for application is a Hudson sprayer, which has a nozzle that allows for the right fan to be used during application while ensuring consistent coverage throughout the application. Not utilizing the right sprayer for application could prevent the desired results from surfacing.

There are a lot of different factors that come into play when it comes to the residual of any pesticide, which includes but isn’t limited to environmental conditions and where it’s used. A general timespan is that Tempo SC Ultra insecticide lasts for up to 30 days when used indoors, and up to 90 days when used outdoors. During our Tempo SC Ultra review, we’ve found it to be precise to say the least.

You can reapply this insecticide when the timeframe runs out or you see that it’s no longer beneficial when it comes to the elimination of pests. This will help ensure that it continues to produce the desired effects without having to worry about the problems that were once minimized spiraling out of control.

Hopefully, our Tempo SC Ultra review helped answered any questions that you may have had. Feel free to leave a comment or contact us if it hasn’t. We’re always looking for ways that we can improve on it and answer any questions that are commonly asked among today’s consumers.

Just want to see the product? Click here to see at DoMyOwn.com or continue reading to find out more about this insecticide in our review.
See Tempo at DoMyOwn.com

Mike Henderson is a pest control operator from New York with over 15 years experience dealing with a wide range of pests. He shares his knowledge on this blog and provides useful information to help you combat pests on your own. 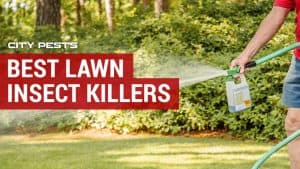 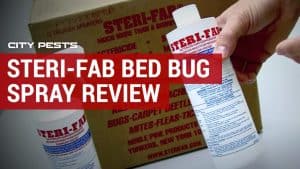 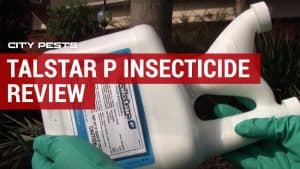 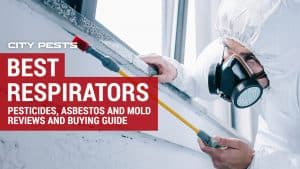 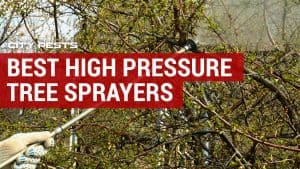 Read More »
PrevPreviousBest Dog Flea Collars – Reviews & Guide
Next6 Best Humane Mouse Traps: Buyer’s Guide & ReviewsNext
This article has been reviewed by our editorial team and has been approved for publication in accordance with our editorial policy. This site also earns from qualifying purchases. Please see our disclaimer page for more information.

Hotels and Pests: How Scared Should I Be?